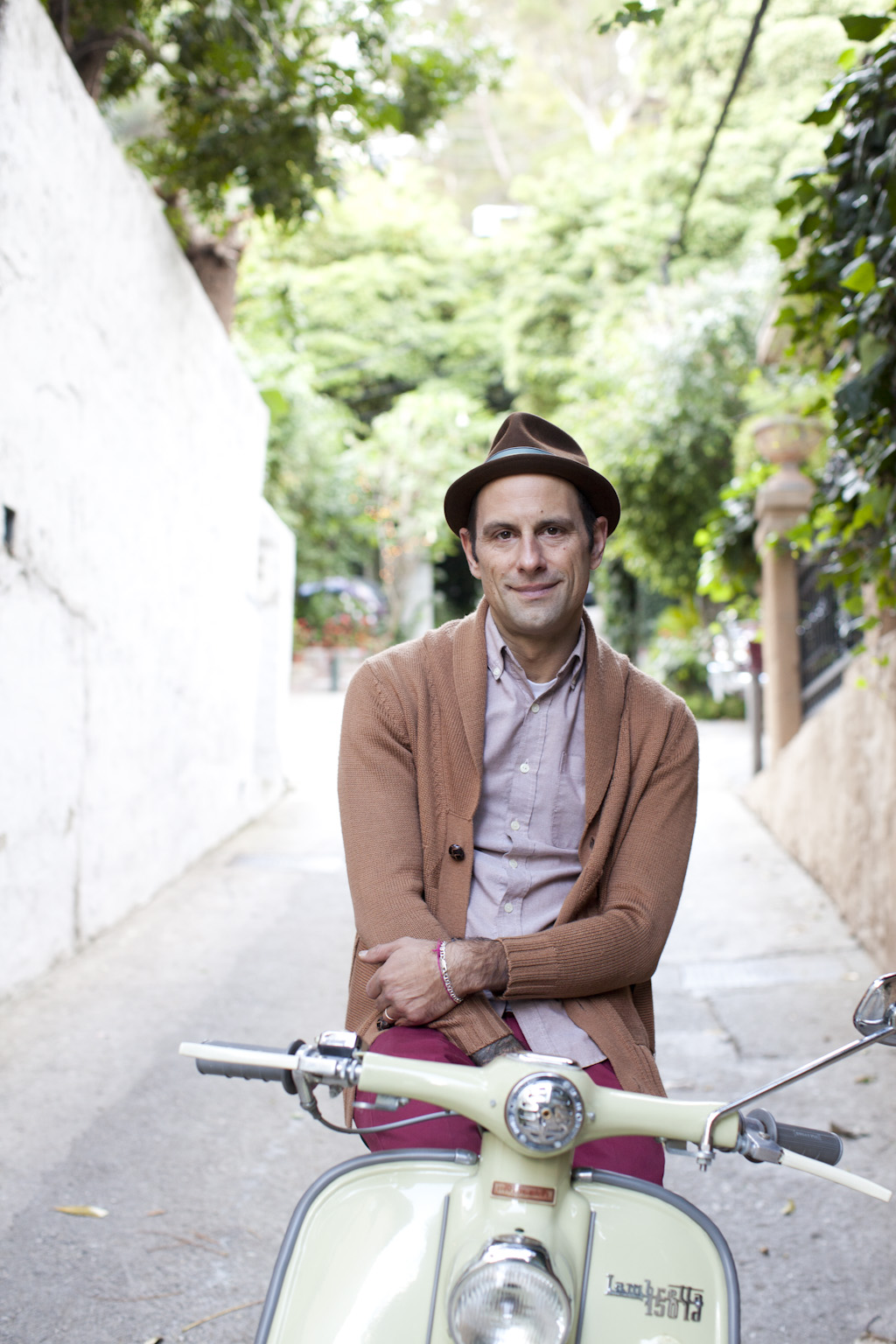 Born in Portland in 1969, Aaron Rose has to be praised as one of the cornerstones of the contemporary art movement who doesn’t get tired of working multidisciplinary and being in uncharted water. An artist, writer, musician, film director, independent curator, photographer and publisher who is currently based in Los Angeles, Aaron Rose is a true multi talent: In the 1990’s he founded the influential Alleged Gallery in New York and at the same time he worked as a producer and director for MTV Networks, collaborating with then budding directors Mike Mills, Spike Jonze and Harmony Korine among others. After 10 years he bowed out of his responsibility for Alleged Gallery in 2002 to continue working as an independent curator. At Los Angeles Museum of Contemporary Art (MoCA) Aaron Rose co-curated the large-scale “Art In The Streets” exhibition in cooperation with Roger Gastman and Jeffrey Deitch in 2011. Also, Rose is signed as a director with the Los Angeles company The Directors Bureau which also represents Wes Anderson, Mike Mills, Roman and Sofia Coppola.

Above all, the majority of people will probably know his pop-folkloristic art works, his various films and shorts but most of all his world touring show “Beautiful Losers”, followed by an award-winning documentary of the same name in 2008. A semi-autobiographical piece about the pressures of being a young artist, the film and the tour introduce us to the loose artists’ collective that was close to Aaron Rose’s Alleged Gallery in the early 1990’s: illustrators, designers, photographers and filmmakers like IWISHUSUN ambassador Cheryl Dunn, Shepard Fairey, Aaron Rose himself, Barry McGee, Mike Mills, Ed Templeton, and Harmony Korine. Now being some of the icons of contemporary pop culture and urban influenced art, back then these creatives, often self-taught, worked outside the mainstream and were inspired by street style and the subcultures of punk, graffiti and hip hop, embracing a DIY aesthetic so they could „make something out of nothing“ – just as Rose puts: “The avant-garde today is the establishment of tomorrow. There’s now wax around it.”

We appreciate Aaron Rose’s work ever since and therefore we are very happy to introduce the inspiring creative chameleon and self-declared beautiful loser to you via this interview. A very warm welcome!

If you happen to be in Berlin in September or in October, don’t miss his „Cults“ show at Circle Culture Gallery. Read more about this solo exhibition here.

What is more important to you, the sense of taste or sight? Why?
Sight is infinitely more important to me! I’m an artist not a chef. In fact I can’t cook anything! Not even pasta! I use my eyes for every single thing I do. I’m addicted to beauty, visual beauty. I love color. I love shape. My personal experience of the world is very connected to my seeing.

You are a creative person. What is your vision for your personal work?
Like most artists, I long for a connection to other people. I’m a storyteller. I believe that is why I work across so many different mediums. There are so many ways to tell stories! Even if those stories are my own, I hope that people will see something of themselves in my work. I want to tell the story of out times. I believe that is the artist’s job.

A few years ago you decided to stop complaining about schools and founded your own school, called “Make something,” that offers creative workshops for children and involves a lot of artists of your past “Beautiful Losers” show and film. Is this school your sequel to these?
Ironically, I started Make Something!! because I absolutely hated school. Especially art school. After art school I was unable to be creative for almost five years. It killed the joy of creation in me. Everything became very regimented, considered. I believe art should be free! For years I complained about this, until one day I got sick of listening to myself and just said, “Aaron, why don’t you change it?” So I wouldn’t say that Make Something!! is a sequel to anything, it’s just an extension. I would never want a young artists to have to go through what I did as the result of education.

Are children “better” artists?
I wouldn’t say that children are better artists than adults, they just haven’t been closed up yet. They don’t over analyse their work. That’s a good lesson.

What is your utmost concern in art?
Connection. If art doesn’t connect with an audience it is not serving its function in society. I worry about this the most in my own work.

Pieces of luggage are often part of your artistic work. Are you a passionate traveller or can it be seen as your personal interpretation of street art characteristics?
I love the dimensionality of three dimensional objects. There is something fantastic about having five different panels intersect the way they do on a suitcase. Plus, I like the idea of recycling, and also pushing art off the idea of it just being a standard square canvas on the wall. Of course, they also have so much meaning in terms of movement, travel, relationships. There are so many personal histories in each piece of luggage. Whose was it? Where did they take it before I acquired it? Who were they with? I can feel the energy in the cases. It’s funny though, for my newer works, I’ve decided to go back to painting on canvas. I guess life just runs in circles. There’s no way around it. I still love suitcases though!

In an interview with Gestalten.tv you claimed that you are addicted to make things and your steady multidisciplinary work proves it true. So you already made a lot of things but what has still to be done?
If I stopped having ideas today, I would still have enough in reserve to last me my entire life! I would of course love to develop more in the crafts I already practice, but also try new things. I’ve been thinking about starting a memoir, and also about choreography. I love dance and I have some interesting ideas for dance performances.

In 2008 The Selby visited you at home and asked you to tell him why collaboration is better than competition. Four years ago you answered: “Being friends with people is just way better than not.” That is how we all wish the world would be like, but is this possible in real life?
I actually still believe the same thing! I think it is possible. So much of it depends on how honest you are able to be with yourself. In every altercation I’ve ever had with another human being, I have always had some part in it. Most disputes can be settled over a cup of coffee!!! Nobody wants to carry the energy around from a grudge.

What is your tactic for making the world a better place?
I don’t expect grand gestures from life. I just try to do lots of little things that help make people’s lives better in small ways. Maybe at the end of the day they’ll all add up to some sort of positive influence on the planet?

When was the last time you gave back and what did you do?
I do this all the time, but I don’t consider it giving back. It’s just the way I believe I should live! I do things for people every week. Sometimes these are small things, like introducing someone to another person that might be able to help them. Some times I work with established charities. Usually I just try to give support to people who I believe are trying to make the world a better place. This could come from anywhere! Sometimes it’s about doing some artwork or a film for an organization that’s doing great things, sometimes it’s just making sure I buy my lunch from an independent restaurant and not a large corporation. There are many ways to give back.

What is the most beautiful thing you ever saw?
My wife on our wedding day.

What would you like to see more often?
I would like to see creativity become more a part of the fabric of our human experience, not just something we consume for entertainment.

What is your picture for IWISHUSUN?
The gift of sight has made me the person and the artist I am today. If there is anyway that someone can contribute to helping another person experience the beauty and wonder of this life experience then I completely stand behind it!! It’s important work.